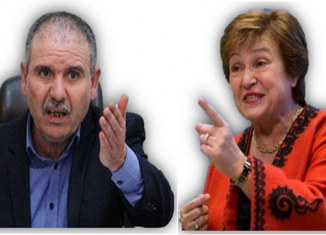 It is not yet all the details, but we already know that the updated volume of the state budget for 2020, which the Tunisian government will present to the IMF team next Thursday, October 8, 2019, five days before a still uncertain second round of the early presidential election will be the least problematic.

We know, for the moment and unless further update, that the next budget, prepared a departing government and a minister of finance likely to retire, will be 46.943 billion TD, against 40.861 billion TD in 2018. A figure, which takes into account the loans and net advances of the treasury. It will increase by 8.7%, compared with the results expected for the 2019 financial year, and will be in fragile and precarious equilibrium.

Tunisia, the undisciplined student of the IMF

The most important thing in this budget, which could be a problem for IMF staff, will be the payroll. It should be 19.030 billion TD, representing just over 45.5% of the total state budget, compared to 17.165 billion expected for 2019.

This, while the main backer, has repeatedly urged Tunisia to show discipline. Tunisia had once ignored its advice on this issue of the large volume of payroll, and even signed a new agreement last summer with the UGTT.

The largest in this budget, as developed by Finance Minister Ridha Chalghoum, already assumes tax revenues of 31.493 billion TD. The financing scheme for the 2020 budget is thus already built on an increase in the tax burden, through a 10.6% rise in the fiscal resources of the budget.

A few small figures, to explain the difficulty to be faced by an entire country because of this document, which seems to be more political than economic and could be considered not bankable by the IMF.

It is recalled that the latter had already delayed the 6th review which was to approve a new tranche of $ 450 million in the framework of the loan of $ 2.9 billion that the IMF granted to Tunisia in 2016.

Meanwhile, the international financial institution had changed its president, and Tunisia will soon change its head of state, prime minister and parliament speaker. That change will take place against the backdrop of electoral promises which are far from reassuring the backers. The candidate that everyone gives for the moment winning has the project to overthrow the entire governance pyramid of the country, to review the agreements with Europe and his supporters mention, without being denied, nationalization.

These are certainly not the types of election promises that will encourage donors to continue backing Tunisia financially. Sources, generally quite well informed, already evoke a probable incapacity of the State to pay wages, from January 2020!

The slush, after Youssef Chahed

Calculator in hand, the draft budget 2020, is untenable and almost unbankable, without going into debt even more (11.230 billion TD next year, according to the information we have about the budget 2020), and without putting the hand in the pocket of a citizen who does not always see the end of the tunnel of difficulties.

The 2020 budget, in fact provides for a 10.6% increase in its resources from taxation for that year. That increase will be like an additional burden for private companies that will soon be out of business and on the budget of citizens who could for that reason take to the street.

It is clear that the state has no other resources. Other than the tax (Oil Revenues, royalties gas pipeline and others), for the whole year 2019 the Tunisian State had planned only 3.639 billion TD, from which it recovered only 1.9 billion TD until last July . Not even enough to pay half the wages of a public sector already overbooked and which is still the only way to reduce unemployment that does not decline (15.3%)!

Meanwhile, no candidate, both presidential and legislative, has made any small proposal, to revive the production of phosphate, to stop the social difficulties in the oil fields, to negotiate with the UGTT a social peace of mind for at least a year, or to bring Tunisians back to work and strive to increase production and productivity.

As for public enterprises, they will continue to be in deficit (especially in transport), to produce always less (in particular phosphate) and to pump the money of the State in support and other budgetary subsidies. This is the slush of which all the candidates in both the legislative and presidential polls seem to be completely unconscious.

Therefore, the 2020 budget is no more than a short-term budget. A budget that does not take into account the new situation to which the country is preparing irreparably.

At best, Tunisia will find itself in the same situation as in 2014. An Executive divided into two parts, with a Parliament crumbled and unable to back a prime minister to be born of deep

political, ideological and societal divergences. This if, as projected by candidate Kais Saïed, it would be able to be voted by Parliament.

So a budget, just of survival and that draws no perspective of a color other than grey. A budget that we would have liked to be accompanied by a “Plan B”.

A kind of parallel budget, taking into account, for example, possible “difficulties” with the IMF that would undermine the financial capacity of the state to meet its internal and external commitments,.

It could even undermine the project of a borrowing from financial markets of 800 M €. Savvy experts say the IMF is the real rating agency of countries and say the WB and the EU, their followers!

A Budget-Plan B, which would outline some austerity measures and the effects of some painful reforms to be made, and that Tunisia will have to do regardless of the IMF or any other backer. A budget, like a lifesaver to which the next government could cling, waiting to develop its own political and economic choices. Who could do that?