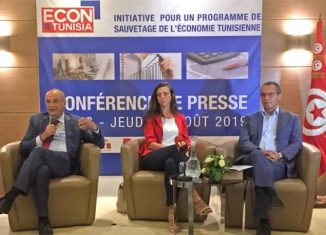 “Thirty concrete and feasible short-term proposals” to save the Tunisian economy currently in crisis were presented Thursday, in Tunis, by economists Hakim Ben Hammouda, Zouhour Karray and Houssem Eddine Chebbi.

These are 32 proposals made in a blue book drawn up by 70 Tunisian economists operating in Tunisia and abroad and recognized internationally by their skills and this, within the framework of the ECON4 TUNISIA initiative (Economy for Tunisia), Hakim Ben Hammouda said during the press conference.

“The objective is to put economic issues at the heart of the public debate to be able to revive the Tunisian economy currently in crisis,” he said, adding that the majority of electoral programs of presidential or legislative candidates have not shown the interest needed for the economic challenges.

For her part Zouhour Karray insisted on the operability of the proposals presented that are achievable in the short term, according to Houssem Eddine Chebbi.

The blue book, which began on July 7, would be presented to the presidential and legislative candidates of 2019, as well as to all political actors to push them to make these questions and proposals of key topics of discussion, with the aim of inspiring the action of public authorities after the elections, said Hakim Ben Hammouda.

“It is a book that reflects the desire of authors to break with the conventional choices that have marked our economic policies as well as that of putting imagination in power and daring in the political and economic action”, he pointed out.

He added: “This blue book expresses the Tunisian economists’ civic commitment to contribute to the public debate and to feed public policies with innovative proposals and projects”.

Ben Hammouda also said the proposals have been formulated around six main priorities to get out of the current economic crisis and start a real economic transition.

Thus, for the ECON4Tunisia initiative, the future economic policies must address six major challenges, namely stabilization, the return of growth and investment, the functioning of markets, sectoral policies long marginalized in the face of hegemony macroeconomic priorities, the governance of economic policies, and the social issue, which has become an emergency weighing heavily on the stability and success of the transition.

All the proposals follow the same framework and understand the context, the effects, the costs and the risks, underlined Ben Hammouda, adding that ECON4Tunisia tried to measure the macroeconomic impact and the consequences of the proposals on the economic situation.

For stabilization, economists propose a fairer and more effective tax system to reduce the fiscal deficit, including “the reduction of the tax burden to 15% and keeping the stability of tax rates” in addition to an urgent control of the trade deficit, a coherent economic policy to control inflation, accompanying monetary policies in the fight against inflation and changing banknotes as a response to smuggling, money laundering and the financing of terrorism.

For the revival of growth and investment, experts recommend strengthening portfolio FDI and accelerating the reform of public enterprises.

For greater market efficiency, the initiative proposes greater resilience of the banking system, a more active Central Bank in supporting the economy and improving the efficiency of the labor market to promote employment.

It also recommends rethinking the exchange rate policy, making the domestic bond market more open to foreign investors, speeding up the listing of companies on the stock market and creating an African Agri-Food Products and Services Exchange.

With regard to the development of new active sectoral policies, experts recommend setting up a 5.0 industry that promotes value chain development and better positioning on global value chains.

They also propose the establishment of an effective industrialization policy for a structural transformation of the economy, strengthening the capacity of Tunisian companies to take advantage of global value chains, new choices in the field of agricultural development, the revision of the agricultural sector support policy to preserve the farming profession and improve the structural competitiveness of the sector in Tunisia.

It is also recommended to accelerate the necessary energy transition, implement the digital revolution and facilitate trade by reducing the transaction costs of international trade in order to strengthen competitiveness and reduce prices for consumers in addition to the support of tourism sector in its transformation.

The experts also recommend limiting the payment deadlines with a view to sustaining businesses and helping them to develop, to set up a new strategic body for decision support in the economic field, the creation of a public debt management agency and a banking supervisory agency; and the creation of an autonomous and independent public policy evaluation agency.

In the social component, the ECON4 Tunisia initiative stresses the need to guarantee a fair, efficient and quality Tunisian school, a school of hope, and to accelerate the reform of the pension system in Tunisia.